Impress is for people that want to impress and Base and Calc will become extinct? Read about the users and the usage of LibreOffice applications as part of the results of our extensive study of LibreOffice users.

Today we discuss the results of our survey concerning the usage of the six LibreOffice applications. We also show how usage is related to other variables we talked about in the last posts (see volume 1 and volume 2).

Writer is the tool which is used most often, followed by Calc. For us surprisingly infrequently used is Impress. The distance to the least used tools Draw, Base and Math is much smaller than expected.

Summing the results up, we found interesting relations between age, expertise and motifs and the frequency individual applications are used:

Knowing these facts can help to improve the different applications. As Base for example is more frequently used by older people it should be designed for older people’s needs and preferences.

Read on to get all details.

As discussed in the last post, due to the large amount of data a lot of tests reveal statistical significance. Therefore we use the effect size ‚eta‘ to identify the relevant results (as a rule of thumb, eta should be greater than 0.5 to spot a highly relevant finding).

Age shows some interesting effects on the use of the LibreOffice applications. Older people seem to use Base about as often as they use Impress. And the older people are the more often they use Base. This effect size is rather high (eta=0.94). The same seems to be true for Calc. Young people use Calc much less often than older ones. This result could be related to a business need for databases and calculating data sheets. Draw and Writer also show relevant effects (see table 1) that cannot easily be explained. Perhaps the different usage pattern of students (see below) takes an impact here. 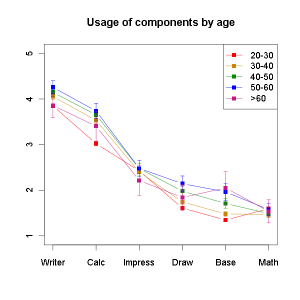 Obviously, unemployed people and students use Calc less frequently. This is probably related to the fact, that Calc is often needed in offices. Many people use it for their jobs (especially people who work in economics, as shown in the graph) rather than privately. So people with no job (and students) don’t need it as often. Another less apparent effect is that people from education and health seem to use Impress more often than people with other professions. Especially for the educational work this is comprehensible, as multimedia presentation are used regularly in schools and universities. 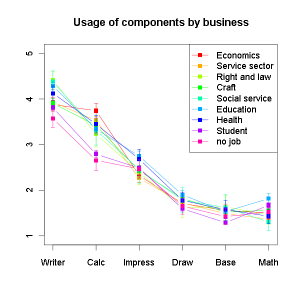 For all other applications there are no major differences between the businesses. This might be influenced by limitations in the question. For example a great amount of participants (almost 20%) indicated that they work in IT which was not present as a single selection option. For the next survey we will improve the options for this question.

Most significant findings when looking at the motives and the usage of LibreOffice applications is that higher ratings on the dimensions power and arousal are accompanied by a more frequent use of LibreOffice in general, and Impress and Calc in detail.

Most likely this is related to work issues. People with a higher power motif could be more career-minded, get to higher positions and hence need to use Impress and Calc (and LibreOffice in general) more often. On the other hand it is interesting and does not seem very clear to us why people with a higher arousal motif also use LibreOffice more often. Perhaps this is related to the fact that these people are more outgoing and hence need tools to create and present.

Quite interesting is the fact that people with a high score on prestige use Impress more often. Although the effect size is only medium high (eta=0,39), it shows that presenting is important for people who want to gain recognition. This finding is a good evidence for the validity of motifs as we measured them. As a more humorist comment: people with a higher prestige do not seem to validate the presented results in a greater depth – at least they do not do that with LibreOffice applications.

Our next episode will be about the user’s preferences in using software in general and how they are related to the other variables.