Similar to the questionnaires about LibreOffice Draw (see first and second blog post) and LibreOffice Calc (see this post) we now run a survey on LibreOffice Impress to learn how the program is utilized, what features are used most frequently, and what users see as positive and negative and what they expect of the future.

The study was prepared and evaluated by Mayu Nanaumi.

In total 148 people completed the survey, which is way less than what we had in the past for Calc and Draw with around 2000 participants. The low number makes it impossible to categorize data and to compare beginner vs. experts, for example.

About 50% are middle-aged, most use Linux, and run the program rather frequently. So the results have again a bias towards tech-affine, expert users.

Many participants work on universities and schools as professor, teacher, or researcher. We asked about the scenario with the idea to learn  about special use cases like 24/7 advertising. However, the participants use Impress just to create or open presentations, share results, run discussions etc. The presentations mostly have between 10 to 20 slides but also up to 100.

When asked what other tools are used, Microsoft Office and Google Slides are named most often, followed by Prezi and Canva. 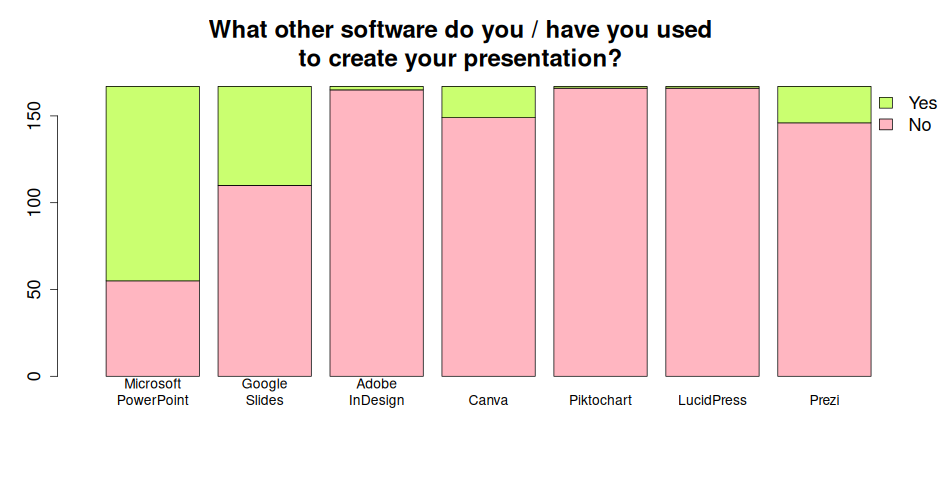 Most interesting for us was the question about functions. We asked on a Likert scale between “I don’t like it at all” (1) and “I like it very much” (5) but also gave participants the opportunity to respond “Not familiar with this feature”. These replies are excluded from the Likert evaluation but shown via gray rectangles on the left (for example, about 50% do not know how to loop a presentation). 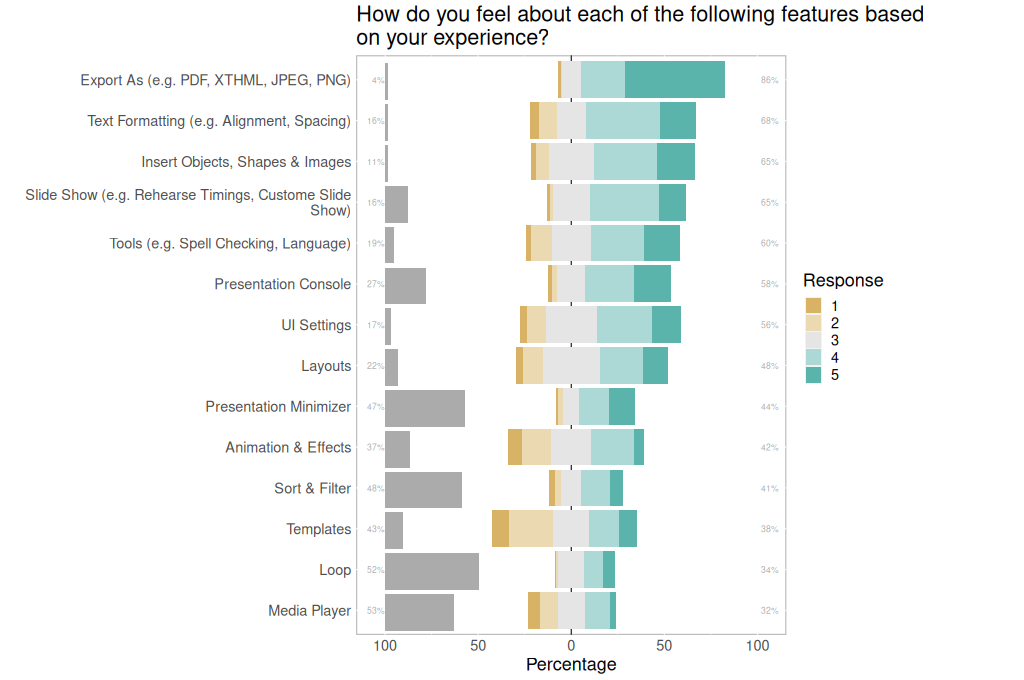 The export functionality, text formatting, and the handling of objects are appreciated best while templates, animations, and the media player are functions that make users not so happy. Looping, the media player, the presentation minimizer are somewhat unknown functions, which is in particular interesting for the minimizer since users like it otherwise a lot.

We also intended this question to prime the following open questions:

The Positive: What features/functions do you find the most helpful in your creation process?

Some users simply enjoy basic functions such as adding or editing image, shape, chart and text and how easily they are discoverable.

Most participants have used or are currently using multiple presentation tools and that’s how they learned to have ideas on where to find those basic functions, which could also mean that LibreOffice Impress layouts are intuitive and met the benchmark within the Office Suite products.

Some users were impressed how quickly PDF files can be converted, imported and exported.

The ‘master slide’ was mentioned by many participants that it increases their productivity and seamlessly keep their workflow. The side bar is supportive and easily understood in terms of navigation, so that they spend less time on figuring out where to find all the functions.

Having brief guidance when moving or sizing images or other graphic elements is very useful as a UX aspect. It’s important that the product is flexible to support users at different levels, so that they don’t have to miss out what they are offered and capable of.

Moreover, users are happy with a range of the ‘animation’ option and they found them valuable and helpful in order to create presentation slides more interactive and effectively presentable.

The Negative: Is there any feature/function that doesn’t perform in the way you expected?

From the past to current user experience, the improvements in media player & media embedding seems to be a long-term issue to overcome.

Impress tends to crash when a lot of graphic elements are placed on slides and the product may not be capable of holding it all together to keep on live. Also, it could possibly explain why having many slides sometimes slow down the system performance as some users reported.

In terms of creating documents and contents, there are some functions/features users expect to match between ‘Writer’ and ‘Impress’. For instance, a participant claimed that Impress doesn’t offer font styling like known from Writer, and due to the missing list style bullets need to be defined in two different dialogues.

Some participants mentioned a poor compatibility with Microsoft Office’ PPTX files as a technical issue. However, this could be the extent of current business capability and affordability to approach, for instance, some bugs can be costly to fix due to insufficient funds, especially for non-profit organizations.

As much as the ‘animation’ tool was prized and loved by a lot of users, there seemed to be technical issues that some users were encountering, as these animations tend to present slightly different on some devices. However, the feedback didn’t provide details regarding specific devices or software (to open presentation) and further investigations may need to be conducted if the problem was classified as a high priority.

In addition, some users would like to work with different tools to create a presentation that’s visually enjoyable and attractive to audience, by saying that having collaboration tool could help LibreOffice to meet user expectation.

The Future: Are there any features/functions you wish were there to increase your productivity

The users wish to access a wide range of templates that are flexible to apply in many ways. Some commented that the current templates look outdated and need a modern design to attract users and this could possibly help users to speed up their creation process without modifying too much.

Users would like to level up with Writer to allow harmonizing over in order to complete their presentation. Also, they expect Impress to not crash and avoid slow-down issues when a lot of graphic elements /slides are placed.

Many users enjoy applying the current animation effects to their presentations, although they are keen to find out if it’s possible to have a function like an automatic delay when another animation effect is applied other than simultaneously animating everything at the same time.

For graphic-editing lovers, an ability to change existing objects/shapes would be a winner. For example, converting a circle into rectangle. Last but not least, more controls in media players/presentation mode would be helpful when presenting slides. 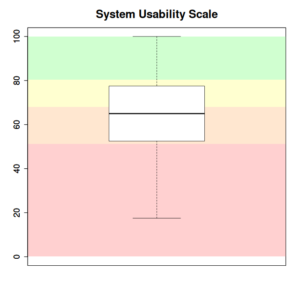 Last but not least we wanted to know if people would recommend LibreOffice, which 90% would do “very likely” or “likely”.

The more standardized Software Usability Scale (SUS) revealed a subpar result of 64. This result is a bit below what we got for LibreOffice Calc but at least close to the acceptance range.

More experienced users rate the program higher (or just tolerate the shortcomings) but due to the low number of participants we couldn’t categorize the analysis.

Most users expect LibreOffice Impress to be a very simple tool where you just copy/paste text and images onto a not so flexible canvas, with features to change layout and design with a few clicks, and to import/export the document from/into various formats.  Ease of use and compatibility are essential for those users. The more advanced use case includes heavy and advanced animations and transitions, scheduled presentations, and more structure for the content. Collaborative functions would be very welcome here.

Besides bugs and performance issues, users struggle mostly with usability. Making the workflow more straight-forward and user-centered is desired. The issues might be caused by the fact that Impress is based on Draw – actually both share the same code. And while Draw has many use cases, Impress would have benefited from a less complex code base and a simple interaction concept.

On the other hand we can improve a lot with more and better designs. To keep the installation small we ship only a few templates but allow users to share their designs on our extension site. Adding those templates is just a click away in the template manager. But many of the other aspects such as layouts, the animation list, the actual handling of templates, etc. need some love by the developers.

There is plenty of work to do, join us in the effort.

We share raw data and R scripts for transparency.