Earlier this year we run a survey on LibreOffice Calc. It was inspired by a similar questionnaire for LibreOffice Draw (see first and second blog post). The Calc survey was used to learn about how Calc is being used, what features are most important to users and where they expect to see the improvements to the software. The work was done by Maria Berg, thanks a lot for your contribution.

This blog post shows some results in detail. You may also see the slides or watch the recording of the presentation at the LibreOffice conference.

In total 1797 people started the survey and 1229 completed all questions. Many thanks to everyone!

We started with a couple of demographic questions that demonstrated the limits of online surveys: most participants were middle age (65% between 33 and 65 years old), technology-affine (60% use Linux as operating system), and power users (45% run the application every day). We advertised the survey on our blog and social media such as Twitter (you may also follow the design team), Reddit, and Facebook. And while LibreOffice has roughly 200 millions users, most of those who are following us are technology enthusiastic.

The results should may be taken with a grain of salt, but on the other hand: Why not trust the experts?

What other data related software do you use?

To understand how Calc is positioned, we asked what other software is used and started with a couple of well-known tools. Unsurprisingly, Microsoft Excel comes first with about 50%, followed by Google Sheets with 33%, R with 9%, and Gnumeric with 3%. Quite interesting is what comes in mind when asked “What else?”. We list the replies categorized and sorted by the number of mentions:

Some other tools for special scenarios such as GnuCash are omitted here.

How large is your typical LibreOffice Calc document?

This question was deliberately asked openly to get a better understanding of how users think about size. Most participants referred to document size in row/columns. Most commonly mentioned sizes were up to 5 sheet with 1000 rows and 25 columns. Some users mentioned their document sizes to contain up to millions of rows, 1000 columns and 100 sheets. Some participants referred to their documents in bytes of around 5MB (up to 1GB).

Which types of functions have you used recently?

LibreOffice Calc provides a vast amount of functions. Since asking about any single function is not possible, we used categories with a few examples. 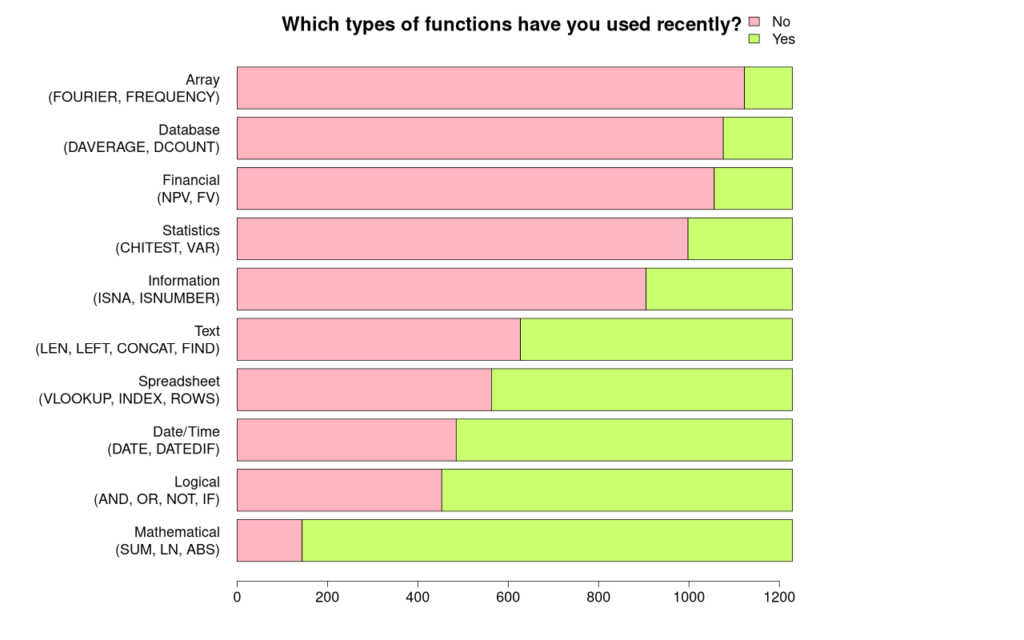 While the distribution is not too surprising, it’s worth to mention that about 20% of surveyed participants use statistical functions and 10% database functions. Our community clearly has many advanced users.

How important or unimportant to you are the following LibreOffice Calc features?

To dig deeper into the topic we asked about specific features. The participants were asked to reply to a Likert scale between 1 “not important at all” and 5 “very important”. To avoid bias that may have been produced by people responding “unimportant” to features that are unknown them, we’ve included “not familiar with the feature” as a potential answer choice. The graph shows these answers as gray bars in percent (100 minus the value). For example, Scenarios are unknown to about 50% of surveyed participants. The graph shows sorted Likert responses with the most important features on the top (the percentage of positive responses is shown on the right, negative on the left). 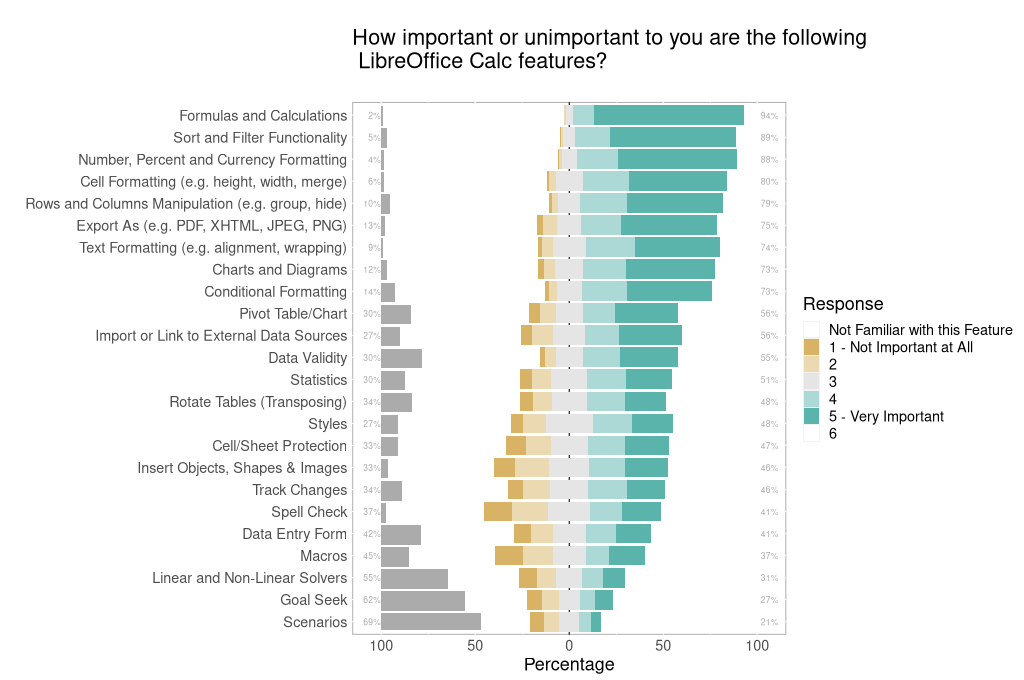 Of course, formulas and calculations as well as sort and filter are essential features for any spreadsheet tool. Not so clear is the rating of formatting features, in particular the text formatting. Many users obviously process data for presentations or use the table to structure their content.

What do you mainly do in LibreOffice Calc?

Usability always starts with scenarios and we wanted to know what LibreOffice Calc is being used for. The results reveal two main categories: to load and inspect structured data and to store small data sets.

Users load structured data, primarily CSV, first of all in order to inspect the content. Manipulation of data such as transposition and pivoting, aggregating, formatting and visualization follows. Some exemplary answers:

Business accounting and household budgeting were reported most often. Project planning and time tracking is also done with the help of LibreOffice Calc. Users keep track of personal data such as fuel and gas/water/electricity consumption, store biometric data like blood pressure or weight, and manage their medication. Many people collect addresses and inventory and organize shopping- and wish lists. Some examples:

Beyond these most common use cases some comments reveal alternative uses of Calc and show the true power of LibreOffice. The charts and graphs are not only used for data inspection, but are also used in education as a tool to illustrate distributions. Users use Calc to run statistical analysis and do financial modeling. The tabular organization of cells can even be used to represent a floor plan.

The responses to “In your opinion, which LibreOffice Calc feature[s] (if any) need improvements the most?” boil down to six categories:

Users expect better usability, improvements to the UI and a modern design in general, better styles and formatting. Users want Notebookbars to shine, expect better icons, and wish to see a dark mode.

Better compatibility with other file formats in particular Microsoft Excel is desired, as well as an improved connectivity to external data sources, and better default keyboard shortcuts.

Speed and performance improvements are needed for large datasets. Users also expect developers to work on stability and to fix bugs.

Introducing a smooth scrolling on large rows was mentioned a couple of times. The ability to use more columns is expected as well as better handling of charts. Greater variety of chart types are also desired. The formula and functions wizards have room for improvement. The autocomplete feature and conditional formatting also need improvements, and last but not least users ask for collaboration features.

Improvements for macros, including a macro recorder, and programming in general with focus on Python, are expected.

Users want to be able to find the features they need with ease. They also want a better learnability, and ask for more help and documentation.

Last but not least we wanted to know how well LibreOffice Calc performs on a standard usability test. This System Usabiliy Scale (SUS) is widely used in industry and produces results that are easy to compare. The test consists of a couple of simple questions and is more suited for websites and mobile apps than complex applications, where one aspect might be easy to use while others are designed for experts, but the rating is interesting anyway. 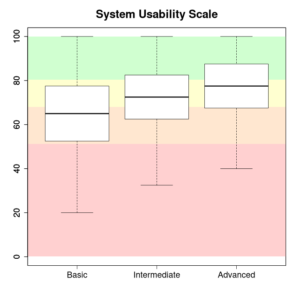 In our development we focus on two kind of users: people who run the application occasionally and just want to get a simple task done with no frills and the advanced experts who tend to try all software features. This assumption has proven to be correct again in this survey, even after taking into account the fact that the sample we’ve used is not representative.

While working on Calc, we have to continue to accommodate both beginners and experts. First of all, we need to simplify most common user tasks. That might be an overhaul of wizards, more straight-forward interactions with the sidebar, or shortcuts to frequently used workflows. As the design team, we will pick up requests from the bugtracker, prioritized on the outcome of this survey, collect all the requirements into user stories, and draft mockups for an improved workflow. You are very welcome to join this effort. However, what’s also required are improvements to existing functions where stability and performance come first. If you are a student you might be interested in participating in the Google Summer of Code next year.

Another important field where effort is needed is the documentation. Some features are crucial for users but unknown to many. To make the work with LibreOffice a pleasure for everyone it is essential to support and educate new users. Join the documentation team and assist us with writing help articles or spread the word with how-to guides on your own personal blogs. You can also write a new Tip-of-the-Day and illustrate it with pictures or an animated GIFs. Becoming involved is possible for everyone.

We share raw data and R scripts for transparency.