Font handling is a major topic for office suites and as a result, LibreOffice’s bug tracker has numerous reported issues and suggestions on how to enhance the workflow. In a past blog post, we presented a solution for font substitution and now it is time to talk about font listing.

All operating systems come bundled with a large number of default fonts, while software installations and users can install additional fonts. So a user’s system has many sans, serif, and mono fonts, as well as language-specific (like MS Yahei, Noto Sans Arabic) and symbol (like Wingding, OpenSymbol) fonts.

The font name combobox lists these hundreds of fonts, but would be more useful if it displays only those that users apply in their documents. So we need further supportive functions beyond the current auto-completion and find-when-typing features.

According the requests on Bugzilla there are two new requirements:

Note: Some tickets contain solutions instead of the actual need that is used in those user stories. Thus, the relation between ticket ID and requirement is not explicit.

In other words, we need a solution to hide fonts that are not needed (not mentioned in the tickets, but likely required is an option to temporarily show hidden fonts, for example when editing formulas) and provide a better way to filter or highlight items on the font name list. 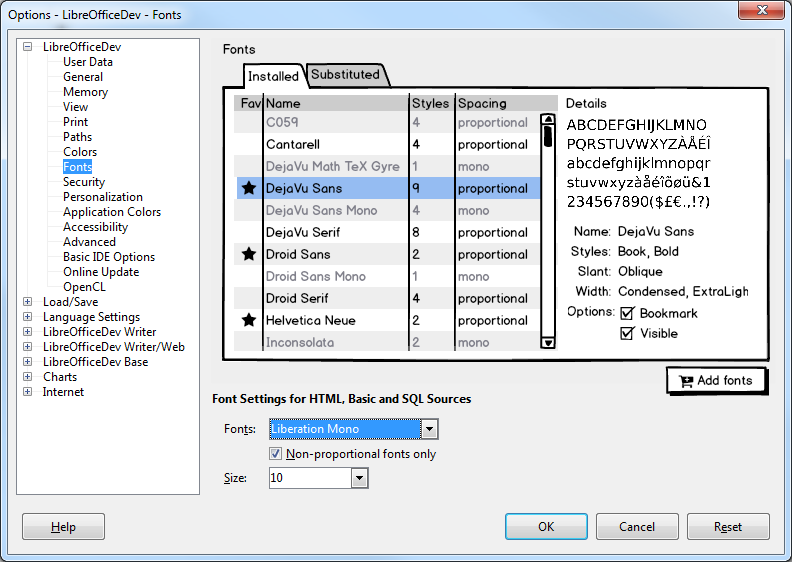 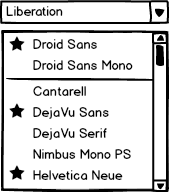 The idea is based on bookmarks known from Internet browsers, for instance. Favorite fonts are those that have checked at the Bookmark option. And these items are highlighted in the fonts list.

When the Visible checkbox is unchecked in the tabular list, a font will be hidden in the combobox but still shown if used in the document, like in the example Droid Sans Mono, or when the user types to search.

Whether Visible is on or off could be set initially depending on the system language in order to hide non-locale fonts. 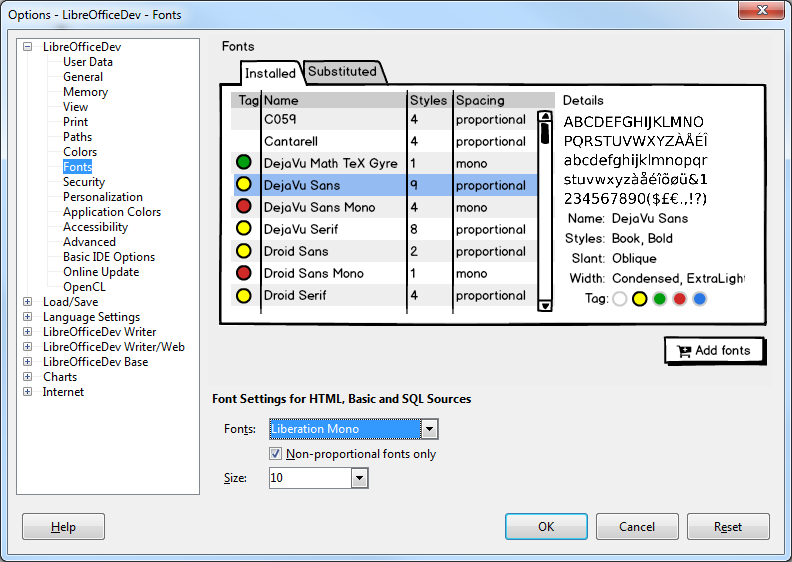 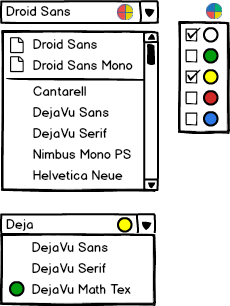 This option is inspired by a feature in the macOS file browser where you can mark files with a color tag and filter later by just this color. Though tagging is not limited to colors, it can also be done with labels.

The user defines what color the font is tagged with (all fonts default to White, meaning no tag), and in the font name combobox an additional flat button/icon can be used to dynamically hide and show items that are tagged with the respective color. In the example, White (all untagged) and Yellow (sans and serif types) are active. Checking the green box would add the rarely used DejaVu Math font to the list. Of course this is just an example and the user is free to combine any tag, and the solution could also use labels instead colors.

Ideally, the upper section shows the fonts that are used in the current document instead of recently used as of today.

Searching the font name combobox should temporarily also show results that are hidden. In the lower example, only fonts tagged as Yellow are shown, but the search for DejaVu returns also the mono font, indicated here by its green dot. Fonts assigned to an excluded tag and hidden thereby would still be listed if used in the current document.

The third option is the easiest to customize and its font name combobox has a similar look to the one in Microsoft Office. 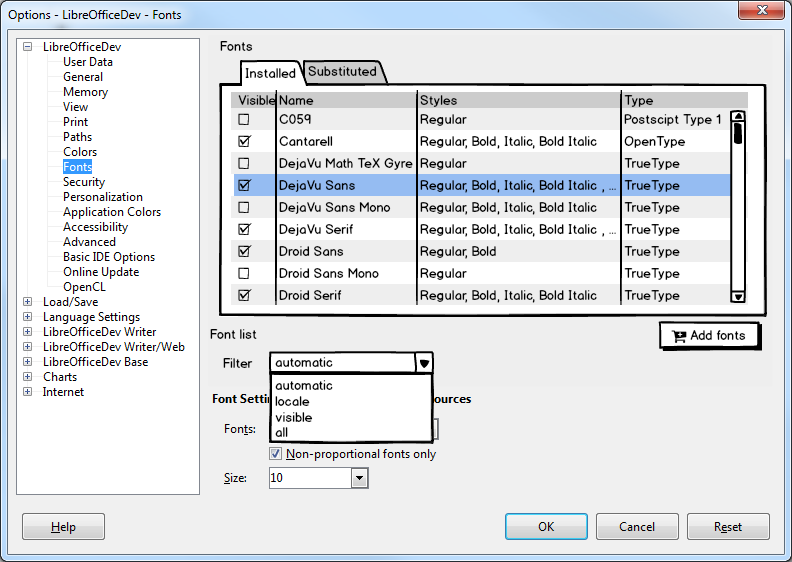 Note: The automatically generated font lists for the Automatic and Locale presets can be modified by turning off the Visible checkbox of any of the displayed fonts.

The font name combobox will be modified to replace the currently unlabeled recently used fonts and all fonts sections with labeled sections for Default Fonts, Document Fonts, and All Fonts. In Writer, Default Fonts will list the latin, asian and/or ctl heading and body text fonts defined in a document, followed by the font region and type in brackets (e.g. Liberation Sans (Headings), Noto Sans CJK Serif SC (Headings-CJK), Nachlieli CLM (Headings-CTL)). Document Fonts will list fonts used in the document which aren’t already listed under Default Fonts. All Fonts will list the fonts filtered by the filter presets in the Options dialog and the fonts in the current document. If the filter preset isn’t set to the ‘All’ preset, a ‘More Fonts…’ entry will appear at the bottom of the list, which when clicked will open the Character dialog’s Font tab, so the user can still select fonts that weren’t listed.

Figure 6: Font name list with sections according the presets

We presented three options to deal with large lists of fonts, with varying flexibility. What is your opinion? Do you prefer the current status quo refusing the proposals perhaps considering that fonts management should be done on the system level, or the simple favorite option with bookmarks, the tagging idea, or filter presets with section labels.

Many thanks to Áron Budea, Mike Kaganski, Thomas Lendo, and Yousuf Philips.