With the release of LibreOffice 4.1, the Sidebar was introduced. It was originally developed for IBM Lotus Symphony, apparently as an alternative to the toolbar, however the usability foundation of this concept was not elaborated. The question “What is the sidebar good for” should be answered clearly in order not to overutilize or abuse this widget. 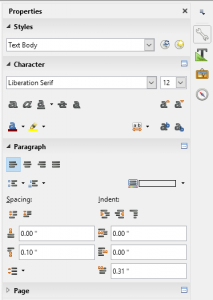 The first reason is that modern widescreen monitors provide a lot of horizontal space, whereas it is limited vertically. Unlike common toolbars, the sidebar takes no additional vertical space, so it improves on the traditional toolbar model by giving access to frequently used functions.

However, limiting the number of functions in the toolbar makes sense not only because of the space. Human perception is restricted. And although similar functions can be grouped, for instance a chunk of file operations Open, Save, Print etc., having access to only the most frequently used features is crucial for usability. The sidebar contradicts this axiom.

An alternative concept is to use the sidebar for access to frequently used properties. In other words, the toolbar is there to start functions – for instance inserting a shape – and the sidebar to change properties, i.e. the shape’s color. The common text formatting toolbar, as an example, consists of direct formatting options like bold, italic, and underline. Those items change the property of the selected text, and would be accessible from the sidebar only to strictly meet the concept.

Another concept is that of dockable panels, which is well known for a long time. You can easily arrange the UI to your preference by dragging the toolbars and docking it to the left or right side. In Libreoffice you can have the Navigator (F5) as a separate panel, usually docked to the left side. This panel allows to include more and larger controls such as lists or trees. With docked panels in mind you would ignore the aspect of frequently used features in favor of a container for interactive controls.

Why do we need a clear concept? Ideas concerning the sidebar are repeatedly filed at the bug tracker. As of today we have 87 bug reports or feature requests linked to the sidebar meta bug tdf#65138. From the conceptual perspective, it is relevant to define constraints such as whether this panel can be replaced and docked somewhere else or fully undocked, if the resizing is limited, what type of information is shown, etc. Those questions are discussed repeatedly in the UX team, but with no consensus. What we need is your personal position regarding the handling of the sidebar, but please keep in mind that with more functionality, the complexity increases and the ease of use diminishes.

To answer our questions please go to the following page:

Thanks a lot for your contribution. The study will run until March-18. Please spread the word so we get a good number of replies. Results will be reported here as soon as possible.