With the release of LibreOffice 4.4 last year, we began making incremental updates to the main menus, with the major overhaul happening in the upcoming 5.1 release. The work is guided by LibreOffice’s new Human Interface Guideline (HIG), which has given us the core framework, however some questions have arisen challenging the reasoning of our work. So this post is a summary of what we changed, primarily focused on why we’ve done it – and a little outlook of what is planned for the future.

TL;DR: The main menus were changed to improve usability with the goal of  consistency, clarity, and completeness. So try it out and let us know what you think.

The HIG states the following about the menu bar:

And some advice how to label functions and submenus.

Some new guidelines have been used that are not yet defined by the HIG, but will be added soon.

Changes to the Main Menu

To be in accordance with the HIG, in particular with the number of items per menu, the grouping and sorting needed an update. Tedious searches through the menus for a particular function should be minimized by consistency and familiarity. Another goal was to harmonize the menu bars over the different modules/applications. Besides the HIG, the modifications are based on the user metric statistics done by OpenOffice, analysis of a number of competing office suites, reading user feedback, and watching user videos.

As stated in the guidelines, items should be grouped logically. An example is File > Reload and File > Version, with both of them being related to opening a document. Therefore these items were moved upward to the respective position. Furthermore the frequency of usage should be taken into account for the sort order of items. For instance, the insert action is closely associated with adding elements to a document, so Insert > Image, Chart, among others, were moved upward in the same menu. Image was hidden under Picture submenu and Chart was previously hidden behind the Objects submenu, but as images and charts are frequently inserted into documents, these items are now found in the first level. Those rather small-scale changes were applied to many menu items in order to improve the menu structure. 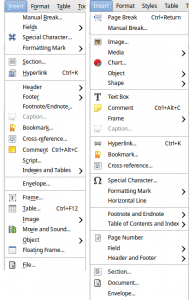 Figure 1: Old (v4.2) vs. new (v5.1) comparison for the Insert menu of Writer. Note that most functions were just resorted according their popularity.

Although we attempted to keep the old arrangement this was not always possible. The Edit menu contains a lot of entries, which made it necessary to move or group items into submenus. That included moving Compare Documents into Track Changes, and creating a References submenu for Footnote/Endnote, Index Entry, and Bibliography Entry. With these changes the structure should be more concise, though there are still too many entries below Edit.

Another large-scale change involves moving items from one menu to another. This happened with Format > Styles and Formatting, which now opens the sidebar’s Styles and Formatting tab on and off, and it was moved into the View menu with the other sidebar related functions. The same is true for Format > AutoCorrect and Edit > AutoText, both of which can now be found under Tools. Sometimes it is not easy to find a good solution, like with the example of Table Boundaries under Table. Moving this item to View was attributed as ‘dumping all under the same place’ (tdf#86647). Those hard decisions were discussed extensively in the UX team.

We had also to rename a couple of functions for clarification and consistent wording. Edit > Changes is now called Track Changes, the item Insert > Indexes and Tables was renamed to Table of Contents and Index, and Table > Heading Rows Repeat is more consistent labeled as Repeat Heading Rows.

Meanwhile, a new Styles top-level menu was introduced to bring to user’s attention the importance of styles, give them menu access to frequently used styles, and allow them to be see their accelerators (shortcut keys).

Calc underwent an even larger changes than Writer. We added a Sheet menu with all functions related to sheet manipulation and management, and since all of the functions were moved from existing menus, the changes will have an impact on users who are familiar with the older menus. The new Sheet menu contains functions from Insert that are related to sheet management such as Page Break, Cells, Rows, Columns etc., as well as delete functions previously found under Edit.

The function Format > Change Case can now be found below the new Format > Text submenu (this happened in all apps), and the Tools > Protect Document submenu was removed in favor of moving its contents (Protect Document and Protect Sheet) into the first level.

Some reorganization was done for the Format and Data menus, mainly just changing the position of items. Again the goal was to have frequently used items above the others and to group functionality. Furthermore we wanted to harmonize the menus for all Libreoffice programs, as discussed in tdf#85945 (Improving the File menu).

Figure 2: Providing easy access to the relevant features with the newly introduced menus Styles, Sheet, and Slide for Writer, Calc, and Impress, respectively.

Similar to Writer and Calc, we have introduced a new menu in Impress: Slide. This new menu aims to consolidated slide management with properties, which were previously found scattered across different places such as Insert > Slide, Duplicate, Expand and Summary, from Edit > Delete Slide, from Slide Show > Interaction, Custom Animation, Transition, Show/Hide. In addition to gather these items together, we also added new entries that weren’t previously found in the menus, like Display Master Background and Set Background Image.

The former View > Master menu was split up so access to all types of masters is available from the first level. Formatting a piece of text was not available from the menu in previous versions and if you wanted to make characters bold, for instance, you had to use the toolbar or open the character formatting dialog. The updated Format menu is consistent across apps and offers access to Text, Spacing, Align, Lists, and Styles.

Figure 3: Harmonizing the main menu over the different Libreoffice apps in order to foster recognizability.

Not all changes can be presented in detail here. Moreover we do not want to discuss the reason why every menu item was moved or renamed. This posting is rather about the foundations. Our goal was to improve accessibility in terms of a) the number of items per menu, b) grouping of functions that belong together, and c) sorting items so that the most often used are found at the top. Most, if not all, of our menus are overloaded. So functions that are used rarely have to be placed in submenus, and those that are more relevant are placed at the upper level. Furthermore, the modules/applications of the Libreoffice suite should all have a common look and feel. That means to have a similar organization in the menus, as much as possible. And finally some items were renamed in order to clarify the underlying functionality.

Of course not every user will be happy with these modifications, as change is always hard to embrace, especially when you are used to a particular workflow. So for that we apologize! But most users, especially the not so tech-savvy and the newcomers, should benefit from the streamlining, and those who wants to stick to the old organization for whatever reason may customization the menu to their liking in Tool > Customize: Menus. Nonetheless, feel free to discuss the changes, as no work is ever completely finished on the first try. Thoughtful and clear ideas are always welcome.

Most of the work has been done for the main three modules/applications, but the other apps are still upcoming, including Draw (tdf#95827). There might be an occasional misplaced item, and some discussions on the bug tracker are still in progress. There are for instance the enhancement regarding adding page numbers (tdf#86630), shortcuts to insert and delete rows and columns (tdf#86049), formatting text as embossed and engraved (tdf#86853), and additional functionality like completely hiding the main menu (tdf#90195). But in general the modifications are done.

Some items are not well named with camel cases (e.g. AutoFormat) or have unclear captions such as Object or Field. On the other hand, as long as no better term is found the known labels are acceptable. Another area of contention is assignment of accelerators and formal short-cuts. Work for GTK+3 on Linux (tdf#92630) and Windows (tdf#54169) affecting visibility of accelerators (and their behavior) is leading to some annoyances when assignments are duplicated.

As always documentation is required, and there is a lag in accomplishing corresponding changes in the built-in and Wiki based help. Fortunately, the menus are mostly self-explanatory, but there is remaining work to be done in bringing all forms current, i.e. tool-tips, Wiki help, and the published use guides.

And in the course of implementing a new configuration for the extended toolbar there will be  probably also room for the main menu. Such a configuration would provide much more flexibility with options to save and load different setups. So stay tuned.